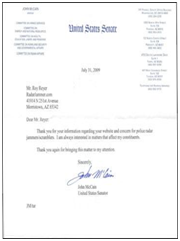 On July 31, 2009 I received my first response regarding my complaint that I had forward to the Federal Communication Commission regarding Best Buy marketing and selling illegal radar jammers/scramblers on their website from United States Senator John Mc Cain in where he thanked me for bringing this violation to his attention.
Then today I received a letter from Jamie L. Friede a Customer Relations Specialist from Best Buy. 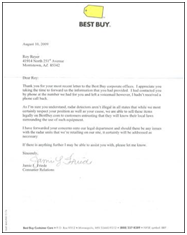 Mr. Freide writes “As I’m sure that you understand, radar detectors are not illegal in all states that while we most certainly respect your position as well as your cause, we will be able to sell these items legally on BestBuy.com to customers”
I assume from Mr. Freide’s response that he didn’t take the time to read that my concern as it was not that BestBuy.com was selling radar detectors, but devices manufactured by Rocky Mountain Radar and marketed as radar scramblers.
The Federal Communications Act of 1934 as amended makes it illegal to market/sell/advertise devices to jam police radar and other RF devices.
In fact, the FCC had cited numerous other retailers for selling the exact same items.
In response, I wrote the following letter in which I outline: 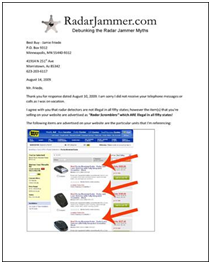