“When it comes to busting bad ads and products that don’t live up to their claims there is no one better than our consumer correspondent Herb Wiesbuam.

He has exposed everything from from bogus work-at-home schemes to quack medical devices.”

For drivers who like to speed this is a dream come true, for $200 a device that promises to make your car invisible to police radar and laser, but do they work?

Bob Bennett bought a Phazer, installed it in his car and he got three tickets.

Herb installs a unit in his car and Lieutenant Jim Hershey of Bellevue Washington Police Department waits down the road with his radar gun and has no trouble clocking Herb’s speed.

In over 50 trips, in two different cars, two different Phazer’s and seven police radar and laser guns. “Beyond a shadow of a doubt the unit does not work.” 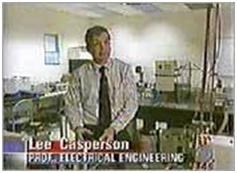 Scene 4
Lee Casperson, Professor of Electrical Engineering at Portland University tests The Phazer
“The amount of power that this puts out is far less then the amount you need to have any effect at all.”

The bottom line, all our experts agree, “don’t waste your money on a Phazer”.

Repeated requests were made to Rocky Mountain Radar to talk about all this but they refused and they provided a bunch of testimonials saying that their product works. But guess what, we checked and they were all bogus.

As an example the state of Tennessee, did not test the Phazer, they don’t endorse The Phazer and their attorney’s have written to have them stop distributing this letter.