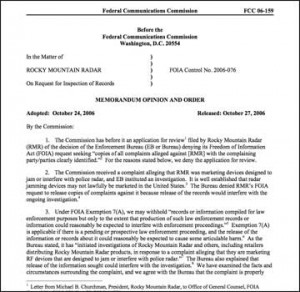 The FCC Issued a memorandum opinion and order on October 27, 2006, denying a request filed on 1/20/2006 by Michael Churchman seeking “copies of all complaints alleged against RMR, with the complaining parties clearly identified, under the “Freedom of Information Act”. (FOIA Control Number 2006-076)

The FCC states that it received a complaint alleging that RMR was marketing devices designed to jam or interfere with police radar, and that the Enforcement Bureau has instituted an investigation.

In Michael Churchman’s letter, he cited several different factors why the complaints should be released:

The November Issue of FHH Telecom Law, Mitchell Lasarus wrote “If the FCC ultimately has to disclose the complaints, it could find that a major source of information on violations quickly dries up.”

So the question arises, does Michael Churchman expect that the FCC will drop the hammer on him, and is this the reason that he has formed a new company KAT (Kick Ass Technologies) that is now selling radar detectors without the claim of being able to scramble police radar?