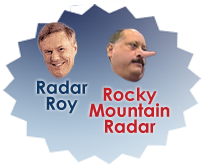 It is the opinion of Radar Roy and all other reviewers that products advertised as passive jamming devices will fail to jam anything!

If you are shopping for a radar jammer to disable the police radar and laser guns so you can avoid speeding tickets, buyer beware.

First to be clear there are basically two different types of devices police use to measure your speed, radar and laser.

The most popular tool police use to measure speed is radar and in the US there are three bands police can use; X-band, K-band and Ka-band.

These radar guns transmit a signal that is in the microwave radio spectrum, that reflects off of moving objects, which is then reflected back to the radar gun and the change in the wavelength is then measured by the radar guns computer and the speed is displayed to the officer.

The second most popular tool police use to measure speed is lidar and works on the same principle as radar, but instead transmits a beam of near infrared light.

These passive devices claim that they inject noise into the reflected back to the police radar/laser gun, they by disabling it.

The other 2% percent of the jammers you will find are classified as active jammers.

Active jammers are designed to send out their own signal back to the police enforcement guns, blocking the reception of your vehicle.

There is currently one radar jammer called the Blue Raider manufactured by Mircom in Eastern Europe, claiming that it can jam police radar.

Radar Roy obtained one of these devices in December of 2014 and found that it was ineffective in jamming any of his radar guns.

Also the Federal Communications Commission has very strict laws regarding devises such as this, with fines as high as $50,000 and 5 years in prision.

Now there is one type of active jammer that are very effective at jamming police laser and there are no federal laws prohibiting its use and those are active laser jammers.

The two most popular are the AntiLaser Priority and the Blinder.

However there are 14 states that do prohibit these devices, they are: