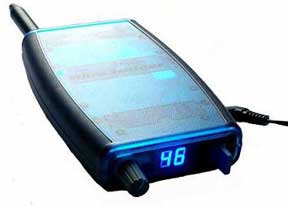 Over the past 3 years there has been a “stalker” on various radar detector and automotive enthusiasts forums promoting a product his Romanian based company makes called the Blue Rader Jammer.

This user has been going my the name Mirowave and spams threads about radar detectors promoting his device called the Blue Raider radar jammer along with posting links to his YouTube videos which he claims demonstrates the effectiveness of his jammer.

Then when a unsuspecting customers take his bait he sends them an invoice via Paypal for payment.

After Microwave does get paid, he then emails back his customer with some sort of excuse that there was a delay with the product and then on the 28th day after the payment ships the jammer.

Now once the customer receives their jammer, they are outside of Paypal’s 30-day dispute policy, thus they are unable to return their jammer or get any sort of refund.

That’s what we wanted to find out and was fortunate enough to have a customer who recently purchased one who sent it to us for our review.

From our inspection of the Blue Raider Radar Jammer it was labeled as being a X and K band radar jammer and is a bit larger then an average radar detector.

To the front there is a knob where you would select your speed offset with a blue LED light displaying the speed, along with an audio selector switch.

To the rear there is a 2 inch black plastic antenna that protrudes which is labeled as the X-band antenna.

We tested this device against a number of our K-band guns and it was only effective in jamming one of our older Kustom analog radar guns.

Also as demonstrated in this online video, the Blue Raider Jammer had virtually no effect on this K-band roadside speed sign.

Using a device such as the Blue Raider radar jammer with the INTENT to jam police radar is punishable by a five-year prison sentence and a $50,000 fine!