Being a regular attendee of both the annual SEMA and CES shows, I have noticed that a good gauge of a company’s success is their overall marketing presentation.

As an example, over the past five years I have watched Michael Churchman increase his presence from a small one-man booth, to an elaborate 20 x 20 display at the 2006 CES show.

Therefore it was somewhat of a surprise to me this year as I walked past RMR’s shrunken 5 x 10 SEMA booth. Gone was the open area with the display shelves showcasing their individual models that provided the attendees the advantage of touch and feel while also providing an open area used to interact with the RMR reps.

This was all replaced with a single line of tables that the reps used as a barricade between themselves and the open floor and behind were a few roll-up poster boards and an LCD screen with their shrunken SKU line up of current products.

Also missing was the Kustom radar gun encased in plexiglas, that they used to make their radar jammers appear as they really worked as advertised.

A few minutes after I past by their booth, I was approached by a Rocky Mountain Radar sales rep who handed me a piece of paper while stating “Before you come over and start harassing us at our booth, read this notice from Mike and perhaps publish it on your website.”

For our distribution and business partners: 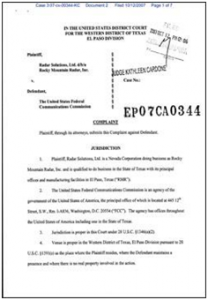 In 2005 the FCC launched a destructive campaign to put us out of business prompted by our competitors in the detector industry. Familiar names like “Radar” Roy and Carl Fors, distributors and supporters of Escort/Bel inundated the FCC with complaints about our “jammers”. What is ironic is while they complained to the FCC that we were marketing devices that interfere with police radar they maintained websites that claim nothing we manufacture works.

In the process of the sham investigation by the FCC, they seriously compromised their offices and violated their own rules. They willingly and deliberately allowed themselves to be used as pawns by our detractors and the detector companies that they work for. As a result of the numerous citations issued by the FCC many of you have quit selling our products, or restricted sale to models not mentioned by the FCC. This has caused us considerable damage in the marketplace.

Rocky Mountain Radar has filed a lawsuit in the Federal District Court, Western District of Texas, El Paso Division, case number EP07CA0344 with six claims for relief including prohibitory injunction and damages plus legal fees. We fully expect to get the injunction within the next 25 days prohibiting the FCC from any further contact with any of our distribution and prohibiting them from taking any action on actions already brought. This will give our distribution chain protection from further harassment by the Federal Government while we force the FCC to follow their own rules. As soon as we receive the Court Order, you will be alerted, or you can check our website, www.RockyMountainRadar.com for updates.

As we grind through the Federal courts we will keep you posted and we do expect to be victorious. No agency should be allowed to conduct its affairs in direct violation of its own rules and no agency is above the law.

We will not rest until we make that point in this action. There is absolutely no question of FCC guilt in ½ of our claims as they proudly admitted what they did in complete ignorance of their own rules. This, after we repeatedly warned them that they were breaking the rules and in direct violation of the process. This of course, exacerbates their duplicity as they blithely allowed themselves to be guided by our competitors. Rest assured that Escort/Bel will cry foul and that they had nothing to do with this, but they knowingly assisted Fors an Roy through the process. We are not sure of Whistler (a dying brand) or Cobra’s involvement.

After reading Mike’s letter it was begriming to make sense. Perhaps the reps felt that they needed a barrier between themselves and their distributors, many of whom had received expensive citations for selling their illegal products? And perhaps Mike didn’t want to have his products carted away by the FCC incase they paid a visit?

I also found it interesting that neither the President of the RMR corporation Mike Churchman, or his head engineer Raul, never was seen at their booth during the four day show.

Radar Solutions, LTD. d/b/a Rocky Mountain Radar Incorporated six-part complaint alleges that the FCC followed through with their investigation only after informal complaints were filed by competitors in January 2007 adopted a Notice of Apparent Liability for Forfeiture. Despite the the fact that the NAL has not been resolved, the FCC has also filed 20 citations against affiliates and distributors demanding that they stop selling RMR products.

RMR seeks a preliminary and permanent injunction against the FCC along with court costs and attorney fees.